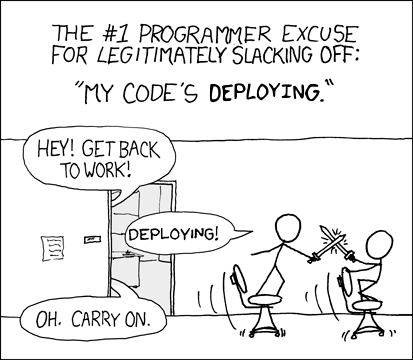 Image is a modified xkcd commic strip. Credit and thanks goes to Joseph Scott.

This was an article was originally written for an overseas company.

1) Do a reality testing

2) Use an artifact repository

Today’s real world of development, applications are not static binaries, but a collection of objects that have an inter-dependencies on each other. A JavaEE Web Application (WAR – Web Archive) may have dependencies of any kind of common functions, such as SLF4J, etc. and these dependencies have their own versions. In a collaborative development environment, you want your developers to share the common libraries and the application can still be built and run in all your environments without breaking deployments (due to missing libraries or incompatible library versions).

Artifact repositories are great at managing multilevel dependencies. This dependency management is critical in reducing errors and ensuring that the right components are included with each build/deployment/release, especially in large scale applications. Also, you can apply governance process to your artifacts such as security, licensing, etc. You can check out repositories such as Apache Archiva, Sonatype Nexus, Artifactory (by JFrog), just to name a few.

It is, therefore, essential that all your Java applications are versioned. For Mavenized Java projects, you specify your application version as well as declare your dependency in a pom.xml file, specifying the source of your artifact repository and voila, your application (with it’s inter-dependencies are shared). This is particularly handy when applying a rollback strategy.

3) Have a rollback strategy

There is no silver bullet for a rollback strategy. The Java team as well as the DevOps engineer should sit down and formulate what constitute as failure for rollback, the best rollback strategy and document the rollback procedures.

A general practice for Java developers is to write code and documenting their code using code comment, highlighting the purpose and intent of the code. Documentation is your best friend. Prior to production deployment, make sure that you have a detailed and accurate document that lists the stakeholders of the projects, the features and bugfixes introduced in your Java applications release, the backup plan, deployment plan, rollback plan, a maintenance plan and communication plans & training plan (if needed). Furthermore, if your DevOps engineer ever leaves, the documentation can be used to retrace their steps and reproduce the deployment process they created.

Manual deployment is the least effective option to deployment as it can introduce errors, especially in large scale and frequent deployments. One of the biggest challenge in Application Lifecycle Management (ALM) is dealing with the tasks of application deployment, there are various tools that allows us to do automated deployment. Make sure that you invest time in choosing the right deployment tool. For Java applications, factors to consider when choosing your deployment tool should include:

Deployment is not just a technological process but also a human process and it is a team effort in order for it to be successful, the most important includes your stakeholders (inside and outside your organization) as well as your end users. It is, therefore, crucial that you understand their requirements, needs and expectations otherwise your deployment will be met with resistance. Communication is crucial in this regard.

Feel free to engage with us to make your IT journey a comfortable ride and your ideas implemented.